Naadam is the most famous, interesting festival and national holiday of Mongolia attracts worldwide attention. Origin of the festival dates back to the great warriors’ period or great Genghis Khaan’s period of the 13th century. Naadam means “Festival or feast of sports”. As well as, the festival is locally termed “Eriin Gurvan Naadam” means “Three manly sports”.

The three sports are: Horse racing, wrestling and archery.

Ancient times, the Mongolian great kings and military generals used to train their warriors and the warriors’ main battle tool horses while competing and feasting those three manly traditional sports have been generating for centuries and being enriched by more traditional sports and games. During the festival, Mongolians dress in colourful and distinctive traditional clothes and ride their most beautiful horses. Official festival celebration takes place through the country between 11 and 13th July annually. Particularly, the Naadam celebration in Ulaanbaatar, a capital of Mongolia is the most marvellous and involves wider range.

There are 21 provinces and their 333 soums (small administrative divisions) in Mongolia celebrate their own festivals. Even though, some of the administrative units celebrate their festival on different dates depends on special celebrity occasions or anniversaries may held certain periods. As well as, celebrating the festival on different dates than the big festival celebrated in Ulaanbaatar allows their local wrestlers, archers and race horses to take part in big competition and celebration. Annually, thousands of tourists head to Mongolia to attend this breathtaking event except for hundreds of journalists broadcasting the celebration worldwide.

This is not only festival and holiday for Mongolians, this is a day proud of their tradition and unique way of nomadic culture. The Naadam festival in Ulaanbaatar allows its audience to admire colourful celebration and see prominent sports while the countryside festivals allow their audiences to participate and deal with locals.

The Ulaanbaatar Naadam starts with a parade of horse soldiers transferring the symbolic “nine banners of the Great Mongol Empire” from the Government house to Naadam stadium. Next, Mongolian president give a speech followed by traditional performances, shows and much more. During Naadam days, there are plenty to see including wrestling, archery, anklebone shooting and horse races which held in the open fields outside of Ulaanbaatar, exhibitions, folklore competitions, souvenirs, food and drinks

Horses competing in the races are trained for at least a month before the festival. There are six racing categories according to the age of the horses, starting from two-years-old horses to fully-grown horses and stallions. The horse races held outside Ulaanbaatar in the open fields. The two-year old horses race a distance of 15 km whereas the fully-grown horses race 30 km. The races are performed by small (child) jockeys. They prefer to race without saddles to be as light and therefore as fast as possible. There are a lot to attract your attention at the horse racing field such as folk and horse shows, holiday meals etc except for the horse race

Wrestlers wear special clothes to show the beauty and strength of their bodies. There is no categorization according to weight. The basic rule of the wrestling is the number of wrestlers must be equal: 512 or as many as 1024 during special anniversaries. The higher-ranking wrestlers choose from lower ranking wrestlers as their competitors. The winners remain for the next round whilst the loser leaves the competition. The competition will continue in this manner until the very last round. Depending on which round the wrestlers win and also depending on their previous title, they receive a new title. The competition becomes more and more interesting round by round as the winner wrestlers receive titles after the fifth round and further. The wrestlers’ titles named after prey of birds and strong animals; falcon, elephant, hawk, garuda, lion and champion. The wrestlers’ imitations of the animals’ gesture are of an interest as well. 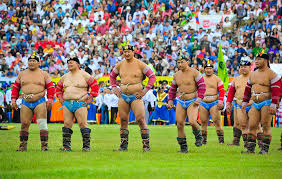 Over the years, there are some changes for the Naadam festival rule. Nowadays, women can attend most competitions and games except for wrestling. This competition is open to women, who draw 20 arrows at a 60 meters target, while men shoot 40 arrows at a 75 meters target. 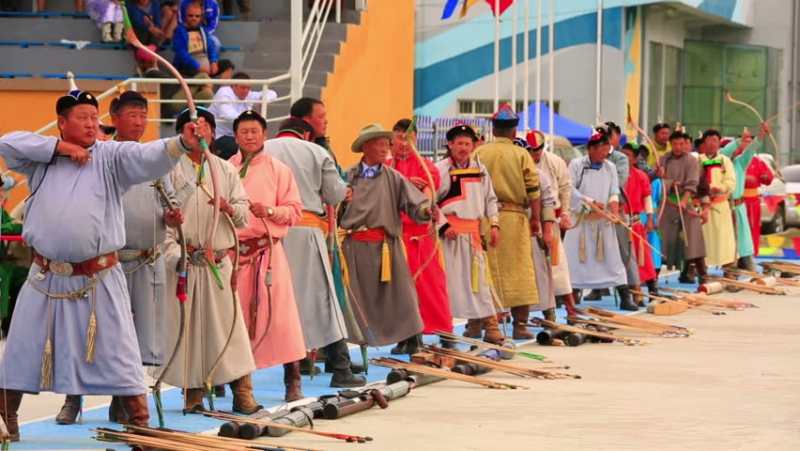